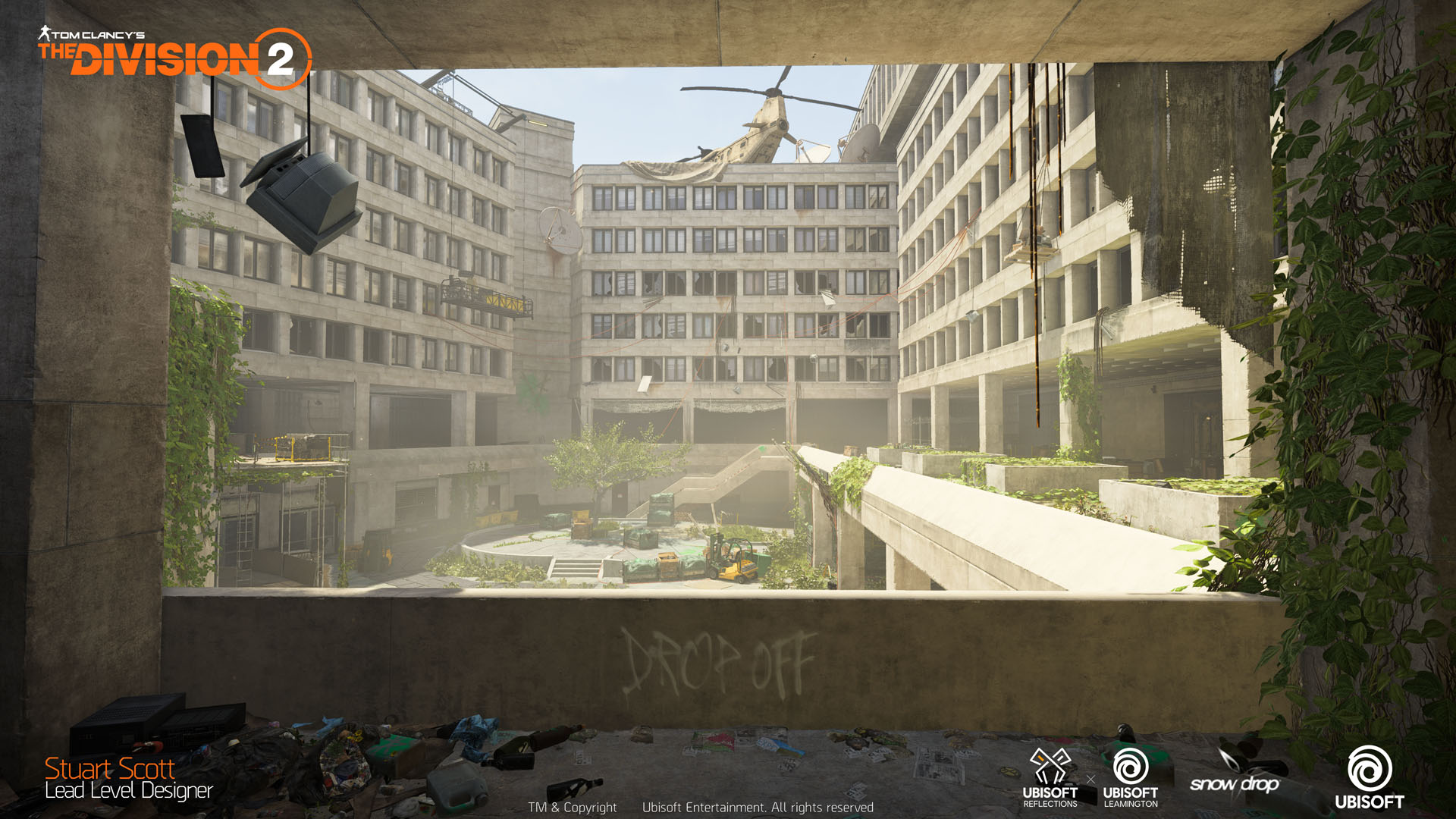 The Division 2 – Side Missions

As a Lead Level Designer on Tom Clancy’s The Division 2, I was responsible for leading the open world design teams across two studios based in Reflections and Ubisoft Leamington. Working closely with Environment Artists, my teams undertook the design and implementation of the following side mission content.

My specific responsibilities as Lead Level Designer of the two teams constructing these missions were as follows:

An early game mission that has players rescuing a key character, Vikram Malik, from Hyena internment. The finale takes place in an impressive open plan tech office that plays with verticality and negative space across multiple stages.

A mysterious SHD signal draws players into a suspenseful investigation, leading to a terrifying engagement with the game’s first Hunter enemy in a shocking ambush. A community favourite mission that provided a small slice of horror for players.

Players must race against time to stop a Hyena attack on a small community. Fight your way floor-by-floor to the rooftop in this modern open plan library designed to provide long range engagements supported by smart flanking.

These lavish high-rise apartments and interconnected gardens have been transformed into a Hyena playground post-outbreak. This space provides intense close quarters combat amongst the now tarnished apartments, with frequent skirmishes across rooftops that overlook the complex’s central plaza.

The real world location of the FBI Headquarters, this mission has players spiralling downwards, through the internal courtyard towards the sealed basement lab to recover experimental SHD tech. Employing strong ambience and exploration of the lab space, this mission culminates in an intense hold-out amidst the pristine lab workstations.

Occupied by the True Sons as a frontline barracks and communications base, the faction were originally drawn to this cultural building to secure the Declaration of Independence sealed in the vaults below. Players must sweep the building to clear the True Sons threat before recovering the cultural artefact.

A dedicated group of conservationists have lost contact with their comrades last seen in the museums of the East Mall. Players must follow their tracks to discover their fate and protect them from True Sons aggression. Culminating in a dynamic cat-and-mouse conflict that constantly forces players to move around the ornate rotunda setting in the centre of the Gallery of Art.

Inspired by the flow of water and nature, this mission situated in the real world location of the National American Indian Museum tasks players with restoring a water source. The architecture and construction of the mission spaces are designed to provide a flowing combat experience from all directions, as well as impressive vista views of the D.C landmarks from the rooftop relaxation space.

Agent Brooks has been sent underground to attempt to circumvent the impregnable defences of the True Sons control point situated above a sinkhole on the East Mall. Players have a tough fight to spiral through the sinkhole’s destruction before emerging on the surface where they are joined by Settlement fighters in a combined assault on the fortifications.

Players are on the trail of True Sons who have recovered a SHD Tech cache from the derailed train crash site. Pursuing along the train tracks, players must fight over, under and amongst the dramatic destruction before securing the cache from the Engineer Boss determined to crack it open.

An unassuming federal building near the Capitol gains interest from SHD once a number of True Sons patrols are wiped out nearby. An investigation reveals a Black Tusk Recon unit has occupied the building, using the internal courtyard as a base for conducting drone reconnaissance on the area undetected. Players must destroy the drone charging stations by overloading the systems to spectacular effect before sweeping the rest of the building for Black Tusk operatives.

Set in the huge exhibition space of the real world Building Museum location, this mission takes place amongst an abstract NYC architectural art exhibit. Originally designed with the intention of providing players with a Godzilla-like experience of fighting amongst a miniature city, this space is visually impressive and the NYC setting provided plenty of opportunity for Easter Eggs and community speculation.

This mission has players sweeping the burnt out remnants of the Police Headquarters, searching for intel on the Hyenas and the sources of their stolen police gear. A difficult mission that sees players engaging with shielded enemies in tightly constrained spaces, before having to assault a mounted gun emplacement head-on in the basement garage to secure the supplies. 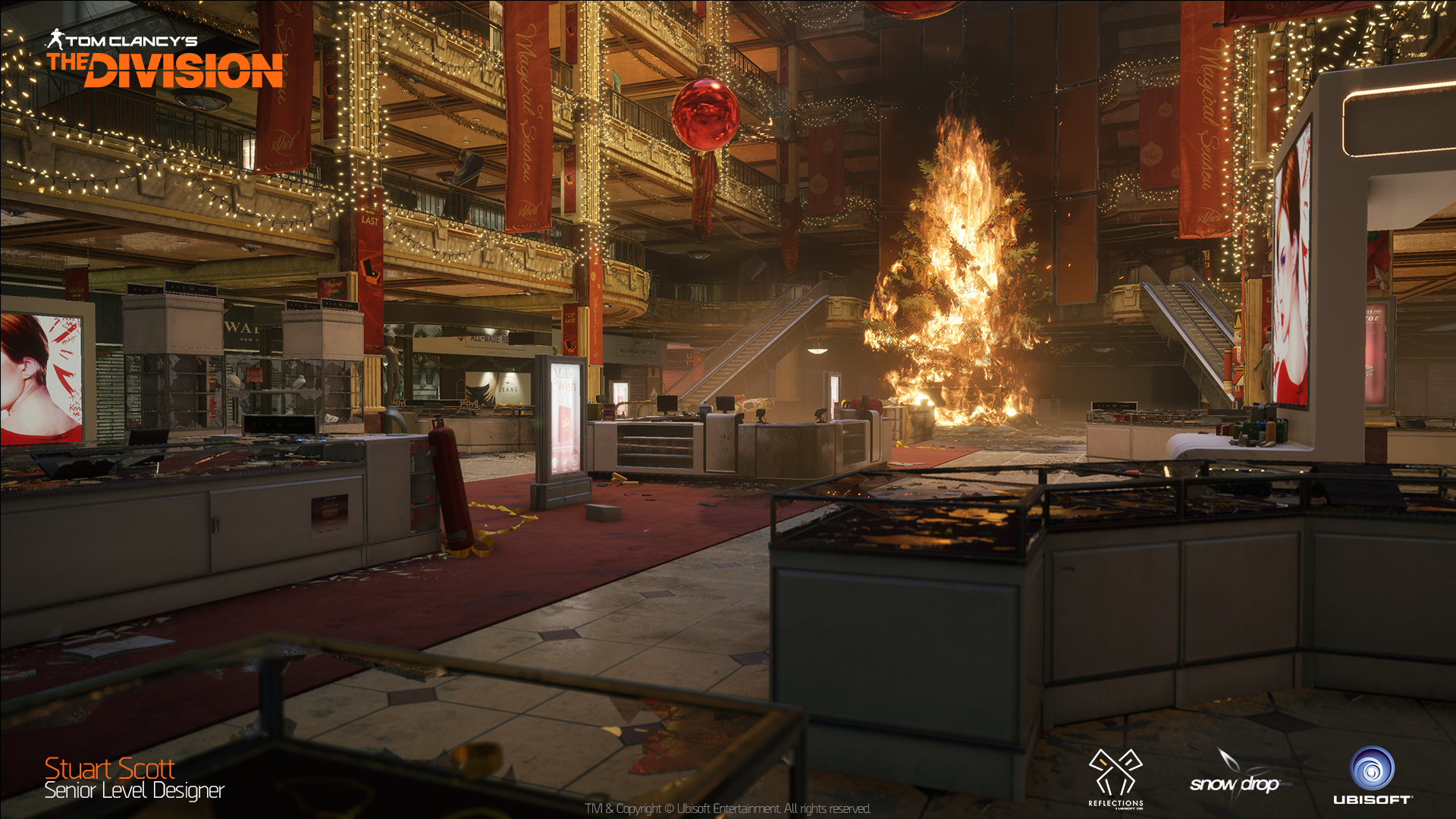 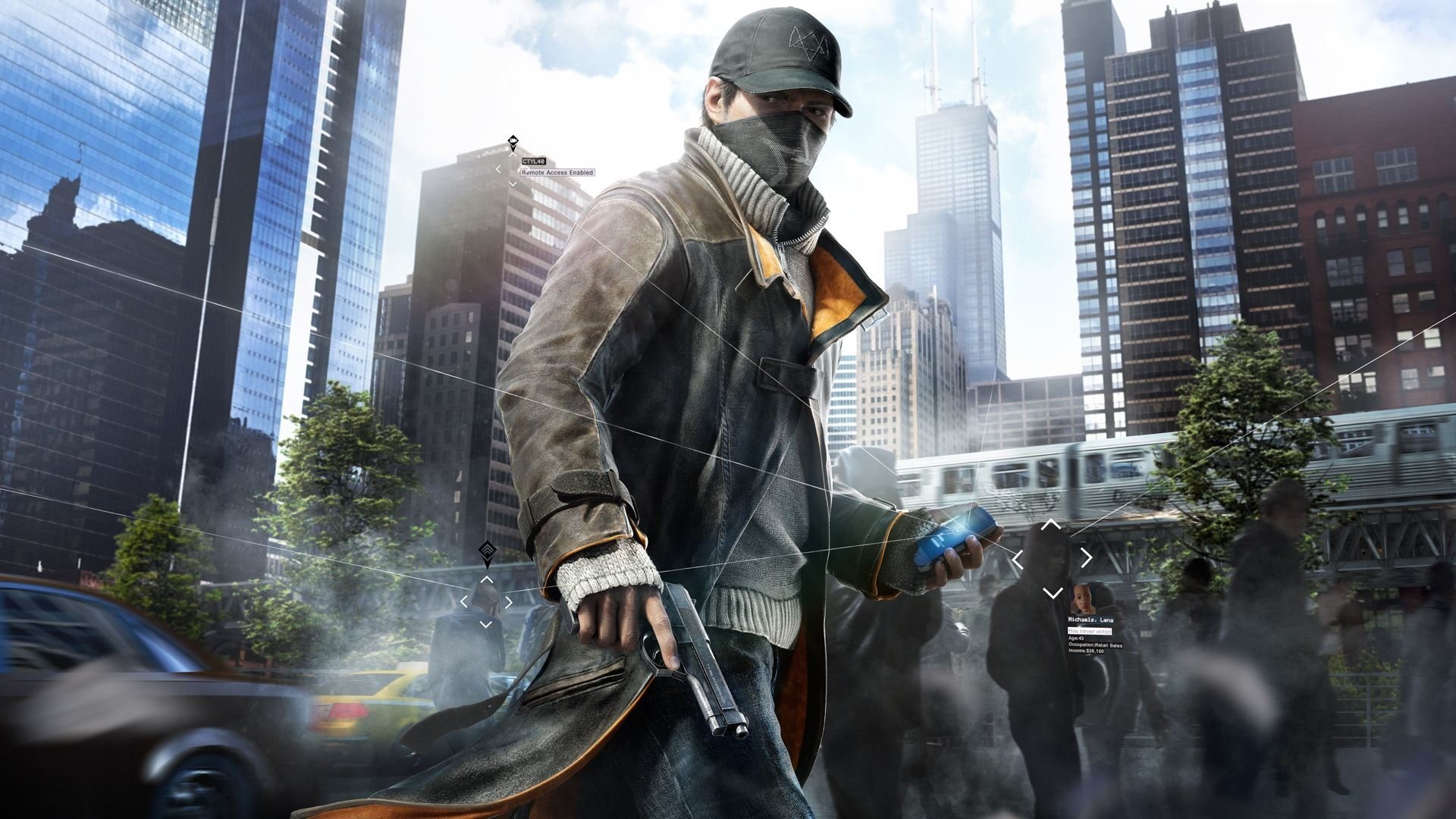 As a Mission Designer/Level Designer on Watch Dogs, I was responsible for the design and creation of a number of driving based side missions called Fixer Contracts.

Transporter contracts were designed to be fast paced vehicle delivery missions that encouraged exploration, parkour and the use of the city’s many shortcuts in order to achieve the fastest delivery times for leaderboards. Adding to the challenge, players had to ensure that damage to the vehicle was kept to a minimum to avoid failure, providing an additional test of their driving skills with high risk/rewards.

Speed through the city and push your driving skills to the max, attracting the attention of the police and CtOS whilst the Fixer uses the distraction for their hacking activities. Designed to take players on high intensity routes that capitalised on the many stunt opportunities throughout the city, these contracts get progressively more challenging as the police close in on you with all their force. 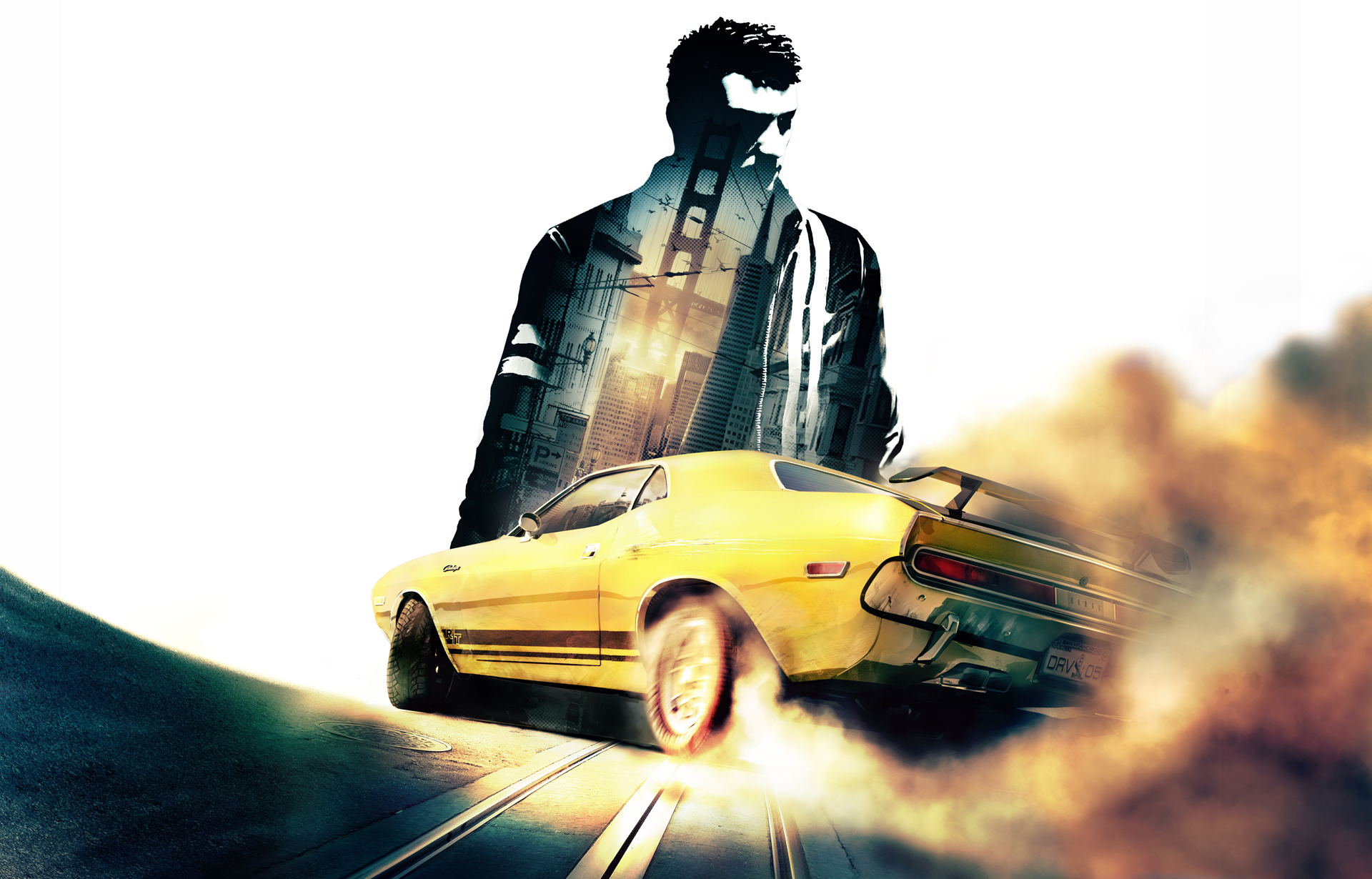 Driver: San Francisco is the critically acclaimed follow up in the Driver franchise that sees the return of Tanner as he pursues wanted criminal Jericho across the city of classic car chases. The game introduces the innovative new Shift feature that allows players to instantly jump into the driving seat of any car in the city to offer a fresh new perspective on the driving game genre.

As a Level Designer and Mission Scripter on Driver: San Francisco I was responsible for designing, producing and maintaining the majority of the side mission content in the single-player campaign which included:

I was responsible for scripting and designing the 2010 E3 demo for the game that would serve as the first public announcement of the project. I was also chosen as a representative of the company to exhibit the demo live on the E3 show floor in the VIP booth during the conference’s duration.