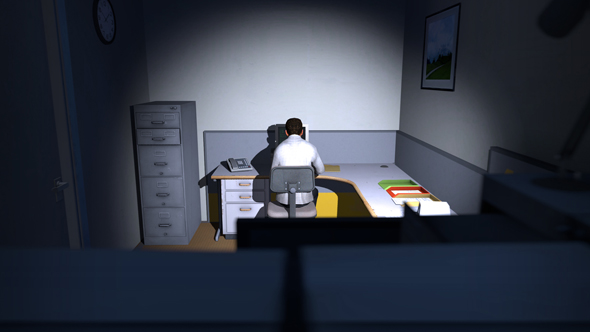 What does it mean for a game to be intriguing? It could be due to the mechanics of its design, or perhaps the form of its presentation. It is the hint of a deeper purpose beneath the initial façade of a game, or possibly just the promise of a new experience for the player.

The following games demonstrated these and many more intriguing qualities to earn a place on my list of the Most Intriguing Games of 2013. 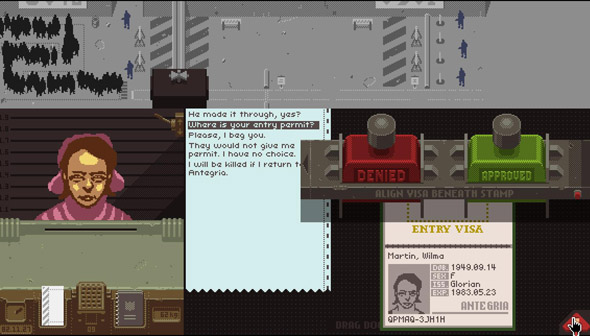 It was way back in March this year when I first played this bureaucratic credential checking simulator by Lucas Pope. At the time the game was still in development but a browser based version was available on Pope’s website.

Despite the apparently mundane premise of the game and the simplistic mechanics, Pope managed to evoke a lot of emotional and ethical dilemmas to the act of checking virtual passports. What initially started as an interesting diversionary challenge one lunch break quickly led to me questioning my own morals and humanity! Quite a journey to take in 30 minutes with a browser based game…

With the release of the standalone version of the game in August, Pope introduced further human complexities and ambiguities within his world of fictional citizens.  Drama, intrigue and despair would be revealed by each hopeful stranger that approached your booth, taking you on a doubt filled quest of questionable incentives.

Pope successfully managed to transform the act of administrative work into a social and psychological commentary of trust, authority and humanity in everyday life, all in the context of a game. Such powerful responses are rarely exploited in a game, let alone as masterfully as Pope does in Papers, Please. 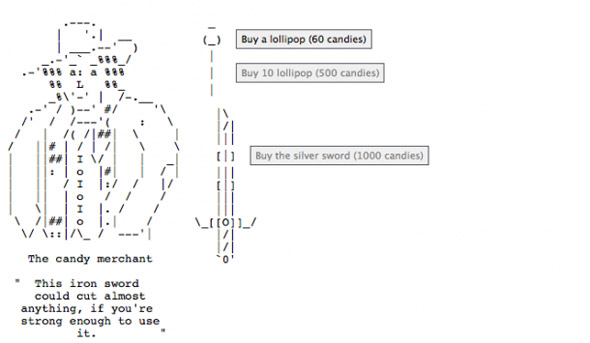 In April, industry luminaries, press representatives and internet commenters were all in unison on social media talking about a new game craze simply known as Candy Box. Such was the fervour surrounding the game and its deliberate mysteriousness that word of mouth quickly took hold and this viral intrigue would play a large part in how the game would prove so popular.

What initially starts as a sparse browser page with a number slowly ticking up begins to unravel into an ever expanding ASCII graphic adventure that rewarded experimentation and curiosity. The crude art style provided a charming nod to text-based adventure games of the 80’s, but also masked the devious psychological nature of the game’s design.

The constant, measured trickle of reward and discovery quickly led to many players becoming addicted to furthering their progress in this fantasy world, hoping to uncover new secrets. However, this deliberate drip feed was no more than a simple time gate intended to draw players back to the game in regular intervals.

It is a design employed by the infamous Facebook games such as Farmville that so frequently received condemnation from many of the people that were now singing the praises of Candy Box. Here was a game that subverted the opinion of many people in the industry, myself included, as to what an acceptable method of controlling player’s enjoyment within a game could be. That unwitting realisation may not have vindicated such design practices, but it definitely captivated a seemingly impervious market and demonstrated how we are all susceptible to addiction.

The Stanley Parable is a brilliant and inspired game that originally started as a Half-Life mod. The experience of playing The Stanley Parable is directly linked to the individual playing it, and therefore in many ways it is difficult to quantify what may captivate a player. In my case, as a Level Designer, I was led on a fantastically humorous journey where I knew the setup to all the jokes, but the punch line still always managed to surprise and entertain me.

The essence of The Stanley Parable was to hold a mirror up to the very fabric of designing and creating a story driven game where the player controls the protagonist. It plays with convention and expectation of level design principles, as well as narrative structure and implementation within games. Therefore, when I looked into the mirror I felt justified, ashamed, fascinated, inspired, entertained and surprised every time I played as each time was different. In fact, I think I will have to go play it just one more time…!