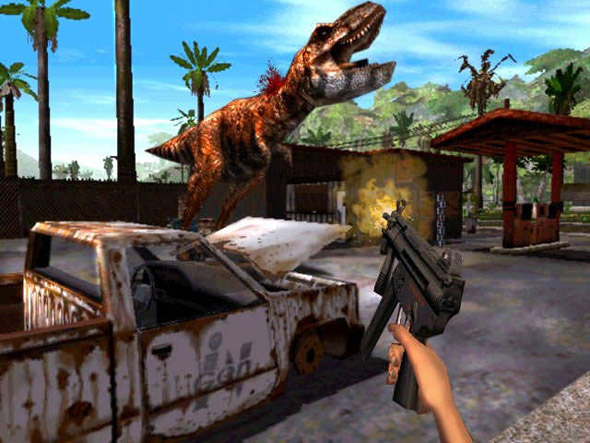 In my previous post I looked at one of my favourite games in a different light to analyse what I considered to be 5 of its less appealing elements. Now, continuing that theme, I am looking at 5 good qualities in an otherwise disappointing game. This is the Best of Jurassic Park: Trespasser. 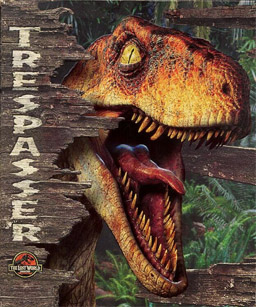 Originally intended to coincide with the release of The Lost World: Jurassic Park movie in 1997, Trespasser was everything a dinosaur loving youngster like me could want in a new FPS game. Unfortunately, the game was a victim of its own grand ideas and imposed release date, leading to most features being cut or unfinished. What was finally released in 1998 was a broken, bland experience that earned it the title “Worst PC Game of the Year” from Gamespot. So, with that in mind, here is what I rate as the 5 best elements of Jurassic Park: Trespasser.

Trespasser was one of the first games of its kind to incorporate a physics engine that allowed objects to react with one another in a realistic fashion. This was clearly evident when playing as most of the limited gameplay involved stacking or toppling piles of boxes to pass obstacles or obtain items. Ignoring some issues with object mass and friction, these physics provided entirely new possibilities for environment manipulation that were very impressive at the time. It would be 6 years before such a seemingly simple feature would be implemented again with any great success in Half-Life 2.

Trespasser was also the first game to utilise Ragdoll Physics to simulate realistic death behaviours through procedurally generated animations. Ragdolls are now a fairly common place feature in games looking to convey a realistic and immersive world to the player, but it might have been a different story without Trespasser. 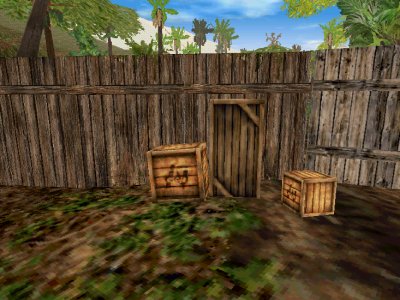 A typical physics based puzzle in Trespasser. This was harder than it looks, honest.

To compliment the impressive new physics system in the game, the developers came up with an alternative control scheme intended to provide players with a full range of control to manipulate the environment. The intention was to simulate the range of movement available in the player character’s arms and hands in game to provide the ability to interact with the world and items in a realistic manner.

In some puzzle elements this required the player to input a key-code on a numerical pad in-game by directing the player character’s pointing index finger. Unfortunately, due to the project cuts the controls were famously unfinished and the result was only one controllable arm that provided little finesse and added frustration. It did provide a new perspective of control to the FPS genre that sadly hasn’t been tried again since.

On the whole, the audio for Trespasser was hit and miss. The music was fairly non-existent and the ambient sound effects added little to the sensation of wandering through an isolated tropical island. The dinosaur sound effects failed to strike any fear or awe as they reacted to the player and lacked variety.

Minnie Driver was drafted in to voice the player character Anne, but delivers a flat lacklustre performance considering she is supposed to be marooned on an island inhabited with said dinosaurs. Thankfully, Richard Attenborough is on hand to reprise his role as Richard Hammond from the film and provides diary monologues that offer some additional insight into the world of Jurassic Park. Although a little random at times, these voice over segments are perhaps one of the few compelling narrative strands in the game that helped dispel the tedium for a few brief moments.

Continuing from the game audio, the weapon sound effects were also quite impressive. Shotguns in particular provided a satisfying blast when fired that could give the Doom shotgun a run for its money in the bang-for-buck stakes.

In addition, there was a good selection of various real world weapons that were all modelled accurately and with an attention to detail sadly unmatched in many other aspects of the game. A particular favourite weapon of mine available in the game was the SPAS-12 shotgun as used by Muldoon in Jurassic Park. 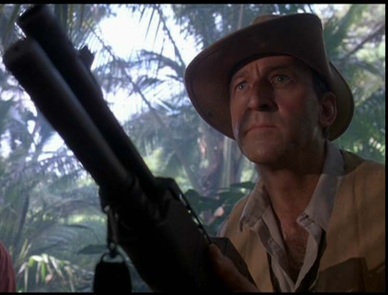 Muldoon on the hunt for game play with his weapon of choice.

The environment art and design in Trespasser was quite an ambitious undertaking for a 3D FPS game at the time. Clearly the intention was to offer the player the opportunity to explore the Site B location from the movies; a massive island of dense jungle and volcanic rock. The team behind Trespasser managed to produce an imposingly large landmass for the game, although, what the world had in scale, it lacked in characteristics or plant life.

Despite the rather barren environment, the world still exhibited some inspiring sights thanks to the massive draw distance the developers managed to obtain with their engine. These were some of the largest environments available at the time which utilised a relatively new technique of presenting distant objects with lower quality versions known as imposters. This technique is widely used in most games now to render vast detailed environments without affecting performance. 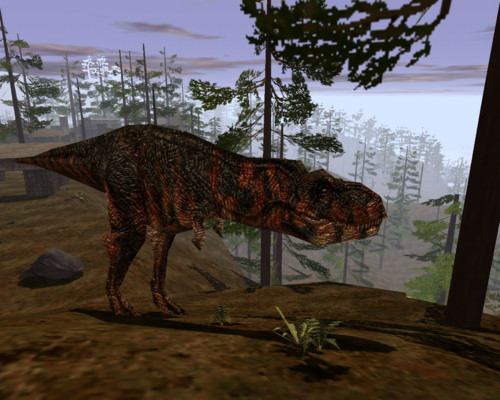 A T-rex gazes into the impressively rendered distance, or it’s AI has broken again.

Looking back on Trespasser, it is evident that there exists a bold and ambitious title at the heart of this game that was sadly unable to deliver. From this shipwreck of a game the driftwood has been salvaged and repurposed into better products that can be seen in many of the great games of today. Trespasser’s unsavoury accolades and “Worst Game” awards shine out like a beacon, warning off any other developers from crashing on the same rocks that marooned this project. Given the chance though, I think the right team could take the grand intentions of Trespasser and produce a truly great game that ‘spares no expense’.